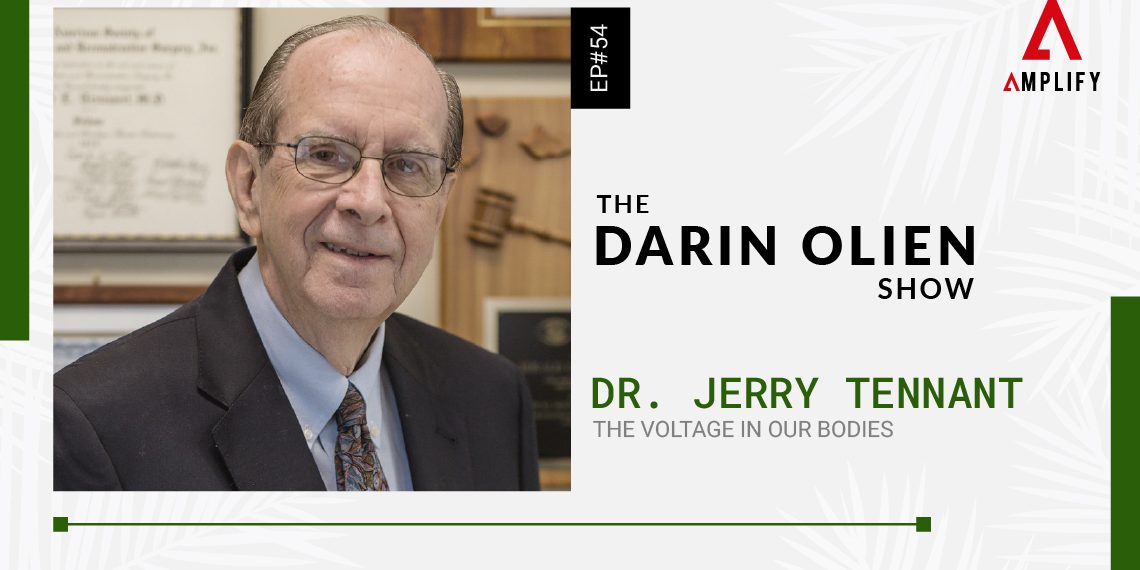 Make sure to catch up on Part 1 by clicking this link!

The following is a partial transcription of Darin Olien’s interview with Dr. Tennant, to listen to the full podcast episode, please visit this link.

Dr. Tennant: Alright, so the next thing I discovered is that making a new cell requires double the voltage -50 millivolts, instead of -25. And so the next thing that was important to begin to bring to the front of the mind is that chronic disease only occurs when we lose the ability to make new cells that work because our cells are constantly wearing themselves out or getting injured. And so you get new cells in the back of your eye every 48 hours, the lining of your guts replaced every three days, the skin you’re setting in today is six weeks old, your liver is eight weeks old, and your nervous system is eight months old. And so it’s constantly wearing itself out or getting injured, and so you must have -50 millivolts in order to make new cells to replace those that quit functioning.

So let’s say in my liver, I don’t have -50 millivolts available to my liver, then every eight weeks, more cells die and don’t get replaced. And eventually, it begins to malfunction because it has an adequate number of cells to do the job. And then again, eventually, it just quits altogether. Because it’s simply that there are not enough functional cells to do anything but deliver what it’s supposed to do and then it quits. So no matter whether you’re talking about your heart, your brain, your eye, whatever. The secret to remember is that we get well by making new cells.

So what’s that funny word mean? Well, if you take a piece of quartz, and squeeze it with a pair of pliers, it emits electrons. So anytime you distort something, then that causes it to emit electrons, that phenomenon is called piezo-electricity. So every time I move my muscles, exercise, move around, or whatever, my muscles are actually generating voltage, generating electrons. Unfortunately, my muscles are also rechargeable batteries. So all of our muscles are stacked one on top of each other in a very specific order like stacking batteries in a flashlight to form a power pack. So every organ in the body has its own battery pack, and a stack of muscle batteries, what’s been called an acupuncture meridian.

So an acupuncture meridian is simply the battery pack for each different organ or each different set of organs. And the body is wired up very much like your house, you know, you come home and reopen the fridge and it’s hot in there and you go into the living room and the TV won’t turn on, you go in the bedroom, the light won’t turn on, you know you’ve got a circuit breaker blown and it took out all of those things because they’re all on the same circuit. When our bodies are wired up the same way, it’s just that the circuits in the body have been called acupuncture meridians.

Now surrounding all of their muscles, of course, is this white shiny stuff. When you carve a turkey you see it in this white shiny stuff, and it’s called fascia. And fascia is the body’s wiring system. The fascia is molecules that are designed and aligned in such a way that electrons can move through them only in one direction, but at the speed of light. Now, some physicists say well, energy or electrons don’t move through leaving things at the speed of light, but that’s been proven to be incorrect by a German physicist by the name of Konstantine Meyl. So he’s proven in his lab that yes, indeed, energy moves or electrons move through the body at speed of light. This helps us understand why if you put essential oil on your big toe, the frequency of that is in your brain at the speed of light.

Now, so we have this muscle battery pack system. And that’s a major provider of voltage. And by the way, just as an aside, the brain uses more voltage than anything else in the body. And therefore it needs the biggest batteries. So the battery supply for the brain is our legs.

Darin Olien: Wow. So that’s the backup “piezo backup system” for the brain is the leg?

Dr. Tennant: Yep. So one of the reasons your brain works better if you go out and walk around the block is because you’ve charged it up.

Darin Olien: Energy begets energy. But now this actually explains it. Right. So just by the moving in the changing of the almost geometry of the muscle, you’re saying that that is the actual pump or the release of energy from that battery pack.

Dr. Tennant: Yeah, so piezoelectricity is the muscles’ battery charger. And so that’s why exercise is important. You know, you’ve talked about exercise being important to move the lymphatics. But I think a much more important job it has is to keep your battery packs charged. Now, another interesting thing is that, as an embryo develops, it starts in the brain, and from the brain circuits extend down into the rest of the body. And as they do so they go through very specific teeth. And so our teeth individually become integrated in specific circuits. And that’s why our teeth have such an important role in all of our electronic circuits.

So, we start with the big batteries in our muscles, they go through the teeth, and then they go down to the cell membranes. And our cell membranes are actually designed to be capacitors. So what in the world is a capacitor? A capacitor is a small battery. So if you’d have two electron conductors separated by an insulator, you have what’s defined as a capacitor, and thus they will store electrons or store voltage. The difference between a capacitor and a battery is simply a capacitor, when it’s asked to discharge completely, discharges all of the energy it has, or as a battery can release it slowly over time.

So basically, again, we have our muscle battery packs, then we have our cell membranes are actually small batteries, if you please. Just underneath the cell membranes is a special kind of water that has been called EZ water, exclusion-zone water. So Dr. Pollack has given it that name. And it’s actually another voltage storage system because instead of being H2o is H302, which is an electron donor form of water. So there’s their third battery. Then we have the mitochondria. And those are the little power stations inside of cells. And inside the mitochondria, we have another rechargeable battery system. It’s called ATP when it’s charged up and it’s called ADP discharged. Well, the ATP is the final battery power source for the cell to do what it needs to do. And as it spins its electrons and becomes a discharged battery. Obviously, you need a battery charger, inside the mitochondria.

And then finally, we have our DNA. Our DNA, when you see pictures of it, you generally see it from the side and it looks like you took a couple of ladders and twisted them together. But if you look at it from the end, you’ll see there’s a big hole down the middle. And down the middle of that hole implodes what’s called scalar energy. And scalar energy has the ability to go down not only do serve as the power supply to your DNA, but it has the power to read it to communicate it to the next new cell it makes to communicate it with other cells in the body. So the scalar energy that implodes into DNA is not only a battery, but it’s an information transfer system.

So we have these five different batteries that must work for the cells to continue to function. So one of the things then that’s important to recognize is that if someone has an organ that’s not functioning normally, you can take it to the bank that it won’t have adequate voltage because all chronic disease is defined by having inadequate voltage. Now the next piece of the puzzle happens to relate to polarity. So if you look at a battery, it has a plus on one end and a minus on the other, right?

If you take any rechargeable battery, and you drain it to zero, the polarity flips upside down. So now if you take a battery and put it in a battery charger upside down, it won’t take a charge will it? And so what happens in our muscle battery packs, in particular, is if we drain our muscles down to zero, they flipped their polarity. And therefore we lose the power that’s necessary to have the -25 millivolts for cells to run correctly. And we certainly don’t have the -50 millivolts it takes to make new cells to repair them. So once the battery is flipped, nothing you do works.

Stay tuned in the weeks to come for the rest of this fascinating interview with Dr. Jerry Tennant!